Lunar New Year 2021 – Year of the Ox – What it means for Business and Professional Success!

Home / Uncategorized / Lunar New Year 2021 – Year of the Ox – What it means for Business and Professional Success!

Lunar New Year 2021 – Year of the Ox – What it means for Business and Professional Success! 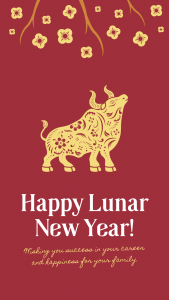 The Asian American Chamber of Commerce has partnered with the Global Chamber of Baltimore – Washington, D.C. to officially kick off the Lunar New Year during its virtual celebration on Thursday, February 11 th at 12 noon. Preserving and recognizing Asian culture is a joint objective of both chambers as they relate the importance of the Lunar New Year to businesses in our region. So what is the Lunar New Year and what is the significance behind the animal assigned? The Lunar New Year refers to the beginning of a calendar year whose months are 12 cycles of the moon or 354 days and differentiates itself from the solar calendar based on 365 days a year. According to the website source “Sciencing,” 12 lunar months make up a lunar year and can be defined as the time the moon takes to pass through each of its phases (new moon, half-moon and full moon) and return back to its original position. A lunar month takes 29.5 days, although this varies slightly around this average. The time period required for Earth to complete one revolution around the sun is called a solar year and each month is one twelfth of a solar year. The differences are minor between a Lunar and a Solar Year and exists so we can have a whole number of days in each month.” Many Asian countries follow the Lunar New Year Calendar as a time for celebration and renewal, thus considering it a “Spring Festival.” However, the Lunar New Year traits has its roots in the celebrations held in China and worldwide by people of Chinese heritage, usually falling in late January or early February of each year. Lunar New Year is an over 5,000-year-old theory dating back to the Shang Dynasty (1600 – 1046 BC) with its 12-month calendar assigned 12 animal zodiac signs that rotate.

The celebratory traditions vary per Asian country with the Chinese New Year Celebrations certainly being most colorful and elaborate throughout the centuries. Traditionally in China, the Lunar New Year celebrations can occur over 15 days with the first seven days being the most celebrated as a national holiday in most Asian countries. The animals of the zodiac are assigned corresponding traits that define those born in that year and outcomes projected within the lunar time frame. This year we welcome “The Ox,” which brings with it strength, reliability, fairness, and conscientiousness, as well as inspiring confidence in others. In China, the Ox is considered an animal of strength that is associated with harvests and fertile ground. Those born in the Year of the Ox are thought to be calm, patient, methodical, and trustworthy – although also very opinionated, strong-willed, and potentially stubborn. Lucky numbers for people born in the year of the Ox include one, four and lucky colors include white, green, and yellow.

So now that we know the science, tradition, and traits associated with the onset of the Lunar New Year, how can we use them for having a successful year in business and beyond? 2021 is specifically seen as the year of the Metal Ox that is expected to bring career advancement, business success, prosperity, and wellness for all zodiac signs. Wearing metal is anticipated to strengthen the traits associated with this year’s zodiac sign, so metallic jewelry is one way to keep the element close you. According to astrologers the second animal in the Chinese Zodiac, the Ox denotes hard work, positivity, and honesty that will dominate the next 12 months in the business sector. Per the predictions, business opportunity is expected to be prime for small business owners with a focus on smart investments that yield a good return. Leaders are advised to avoid impulse decisions and do their due diligence when deciding on whether to undertake new business ventures. The good news is that the Year of Ox is predicted to bring a positive future compared to the previous year’s challenges in the marketplace. The Ox is a hard-working animal that is reliable and steady in nature. So, despite the turbulent year of 2020, businesses are encouraged to keep calm, steady at the helm, and carry on the best they can in 2021, while holding off or pursuing with caution any major moves if they are able. The first day of the Lunar New Year on February 12 th is predicted to be good for engagement or starting up new business ventures. However, use caution when paying out money on this day and assess your rituals.

For those business professionals intrigued by the Lunar New Year and the corresponding Zodiac Signs, there are multiple online sites to assess which signs are compatible for both professional and personal opportunity. The takeaway is that the Year of the Ox is a welcome sign that ushers in a positive and steady direction as we proceed towards 2022, the Year of Tiger, which is seen as a year to leap forward and pounce on the new.

Stay in touch with the “New” at the Asian American Chamber of Commerce, your voice and partner to support the interests of the Asian Pacific American Business Community.

Register to celebrate the Year of the Ox and hear from top business panelists featured at our Lunar New Year Celebration on Thursday, February 11, 2021 at 12:00 pm co-hosted by AACC and the Global Chamber of Baltimore – Washington, D.C. by going to www.asian-americanchamber.org

About the author: Deborah Brent

Has one comment to “Lunar New Year 2021 – Year of the Ox – What it means for Business and Professional Success!”

You can leave a reply or Trackback this post.